The milky way in Dorset over Durdle door 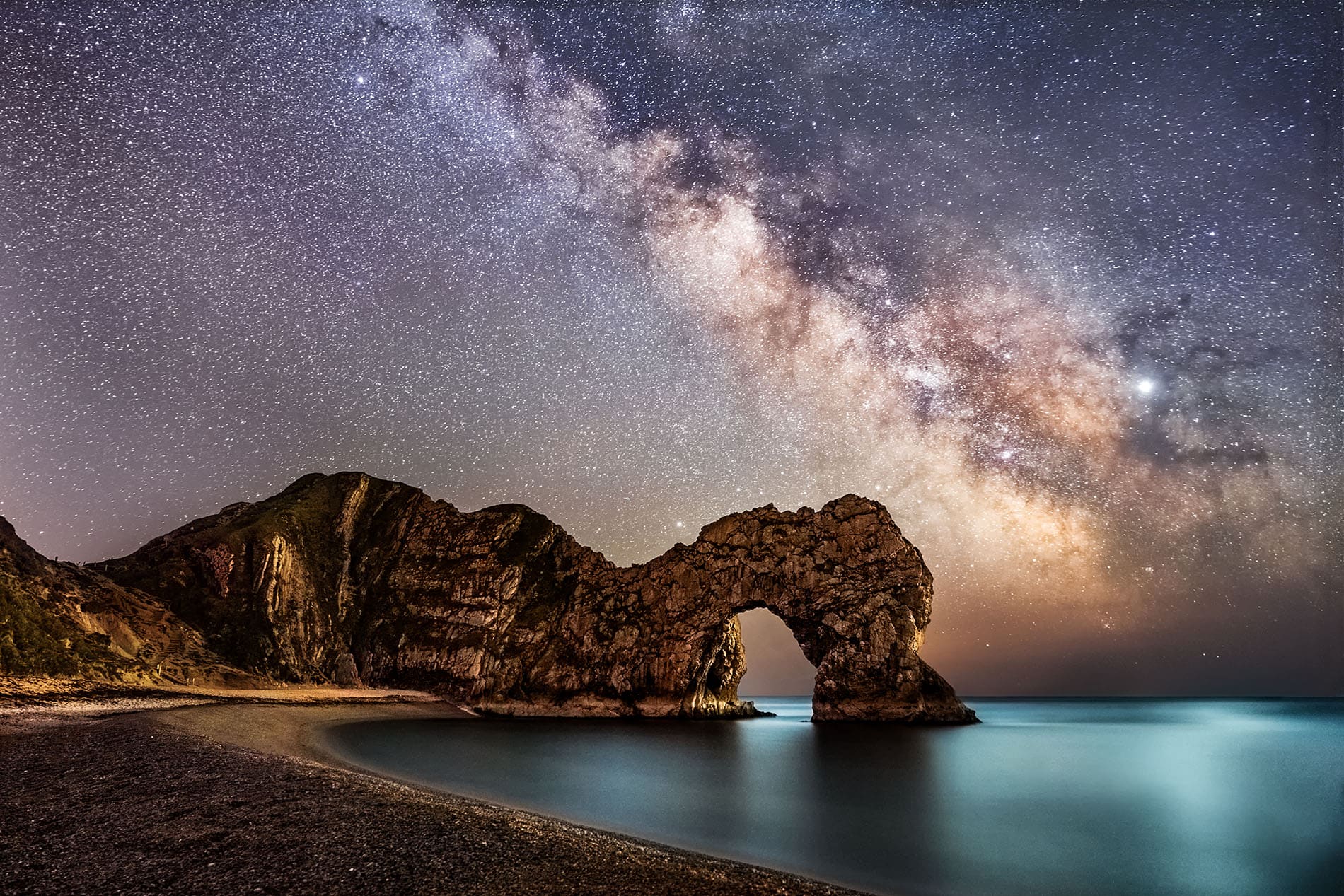 Taking a photo of the milky way in Dorset.

I’ve always been interested in the stars and galaxy’s and every time I have driven somewhere dark to see it, its been cloudy or too much fog. This time was very different. I wanted to take a photo of the milky way in Dorset.

When and how I planned my trip to Dorset and the Jurassic Coast.

I decided early last year that I was going to take a punt on planning a trip to Dorset in May the year after. So I was planning the trip around 10 months in advance. There are a number of apps I use on my phone to scout locations and check the conditions etc. I use an app called sun surveyor on android to see what the moon phase will be and also when you will be able to see the Milky Way’s core, this is the bit of the Milky Way that has all of the colors of the galaxy. I figured out that the weekend of the 4th of May 2019 would be perfect. It was a new moon and you could also see the core too between 1.15am and 2.50am so we booked a long weekend away for that weekend on the off chance that it would be a clear night.

Why Dorset and Durdle Door.

There are plenty of places in the UK you can see the Milky Way but myself and my partner had always wanted to go to Dorset, so we chose there. One of the beaches is located right next to Lulworth Cove which is also a stunning location for photos. My focus was on Durdle Door though for my Milky Way shot.

Stunning locations at Durdle Door on the Jurassic Coast.

I set off after a day with the family to Durdle Door at about 7.30pm. I wanted to get there early to scout the location and get my composition set up as I knew it would be very dark later on and it’s hard to see what you’re doing with no light pollution anywhere. When I arrived I was amazed at how many people were there walking around. It’s very difficult to find parking so I ended up parking on a layby near the entrance to the caravan park which sits at the top of the cliffs.

I set off walking down towards the beach, I’d say it’s around a 40-minute walk down to get onto the beach from where I’d parked the car. With Dorset being such a stunning place there are loads of opportunities to get photos on the way down. I only took two photos on the way down as light was falling fast and I wanted to get down onto the beach. I managed to grab a photo of Lulworth Cove and also on the way down to the Jurassic Coast I also took a photo overlooking Durdle Door. Here are the photos I took just after sunset as I got there later than I expected too. 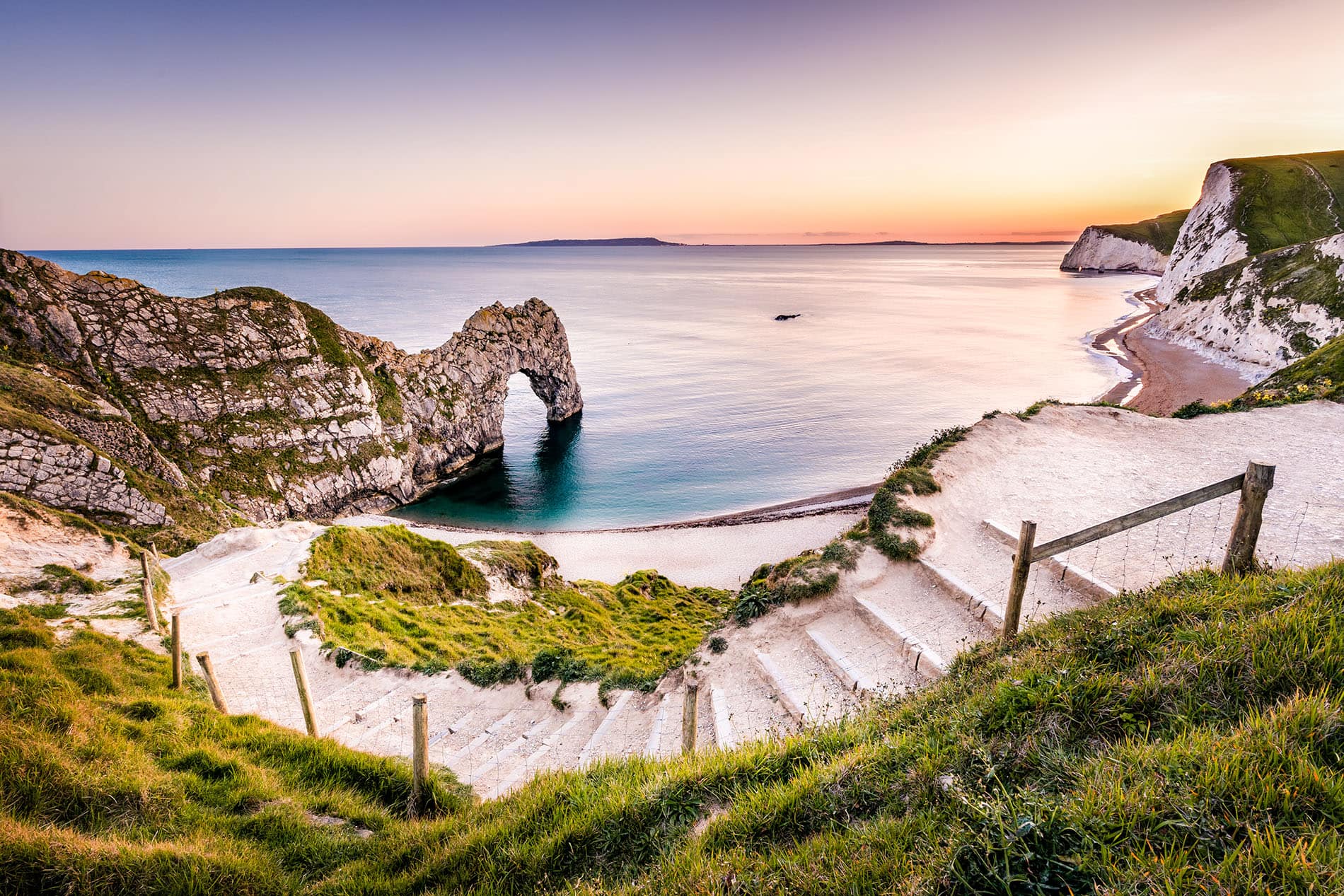 Once I got down onto the beach I had a walk up and down trying to find where I needed to be. I had a photo in my head of what I wanted so I needed to set up my composition so that the Milky Way went over Durdle Door. The Milky Way Dorset is one of those photos people really appreciate as not many people even know about this beach where I’m from. To find out where the Milky Way would be in Dorset I used an app called photopills which is amazing. You basically can tell it what time you will be taking photos and hold your phone up and use augmented reality to see where the Milky Way in Dorset will be at what time. There is still some guessing involved as your phone focal length isn’t the same as your camera and your camera won’t be in the exact position but it gets you closer to where you need to be.

The long wait on Dorset beach and Durdle Door.

After getting my composition I sat down for what would be a very long and cold night. I made a lot of errors on this shoot as I was in a rush to get there. I forgot my phone power bank charger and I’d not put enough clothes on which came to bite me later on in the evening. After sitting there for around 2 hours it was getting really dark, after there being a lot of people around earlier it now ended up that I was on the beach on my own and by this point, my phone had run out too. I’ll be honest I was starting to get worried and nearly called it a day as you feel like you’re miles away from anything with cliffs behind you and a 40-minute walk to the car. Luckily just before I went I saw two people walking up the beach. It turned out he was also there to photograph the Milky Way over Durdle Door. They set up right next to me so I decided to wait it out.

I knew for the Milky Way to be where I wanted it for my photo I needed to wait until around 2.45am. In this time I was waiting, the weather really dropped, this was my second big mistake. I’ve never been so cold in my life. The freezing cold air of the ocean which was only 5 metres from where I was stood and the cold wind in a cove. I was so tempted to go as I was so cold and I had no phone to keep me busy so I was just sat waiting for 2.45am to come. I asked the other photographer to let me know when it’s that time and then I started taking photos.

So many stars in Dorset.

If you are into stargazing you will absolutely love the views you see while being there. Having been sat on the beach for all that time with nothing to do gave me loads of time to sit and look at the stars and watch the Milky Way rise over Durdle Door. It was an amazing site and I would encourage everybody to see the stars in a dark place like that, it’s unbelievable how much more you can see.

The final photo of the Milky Way.

Eventually after over 7 hours of waiting for the Milky Way came into place over Durdle Door. I knew this was my time to get the shot I wanted so I started taking photos. All I could think about now is getting warm as I was freezing down there. After we had packed away I was actually glad of the steep walk back up as it got me back warm again ha.

Here is the photo I got after a lot of post-processing work. I’m really happy with how much detail I managed to pull out the Milky Way and it’s core. I know it’s a rare photo as there are so little opportunities to get this photo as the Milky Way is only at this angle for 3 months of the year and there are only 3 new moons in that time. You then have to take the weather into account to get a clear night. Everything went perfect that night and even with the cold it was one of my favourite shots and shows that patients in photography are key.